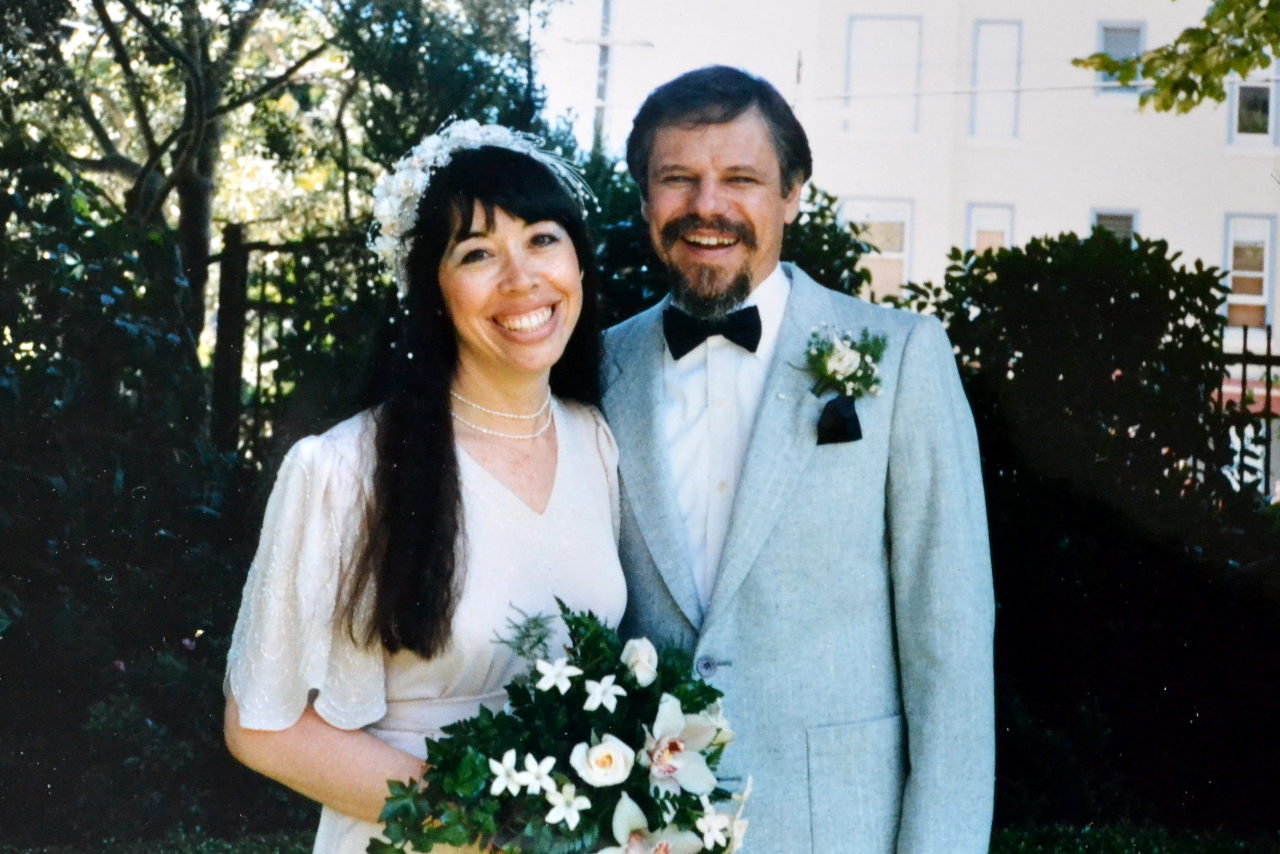 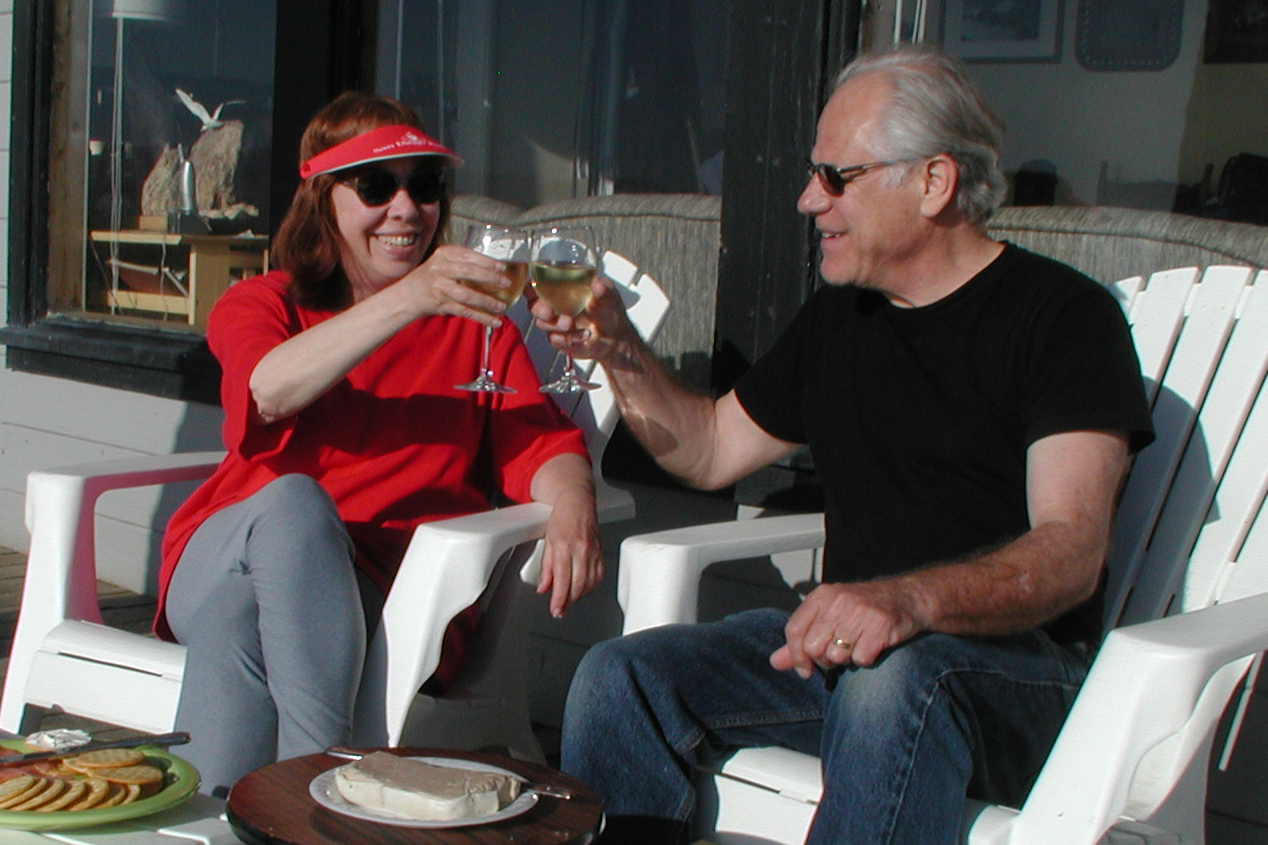 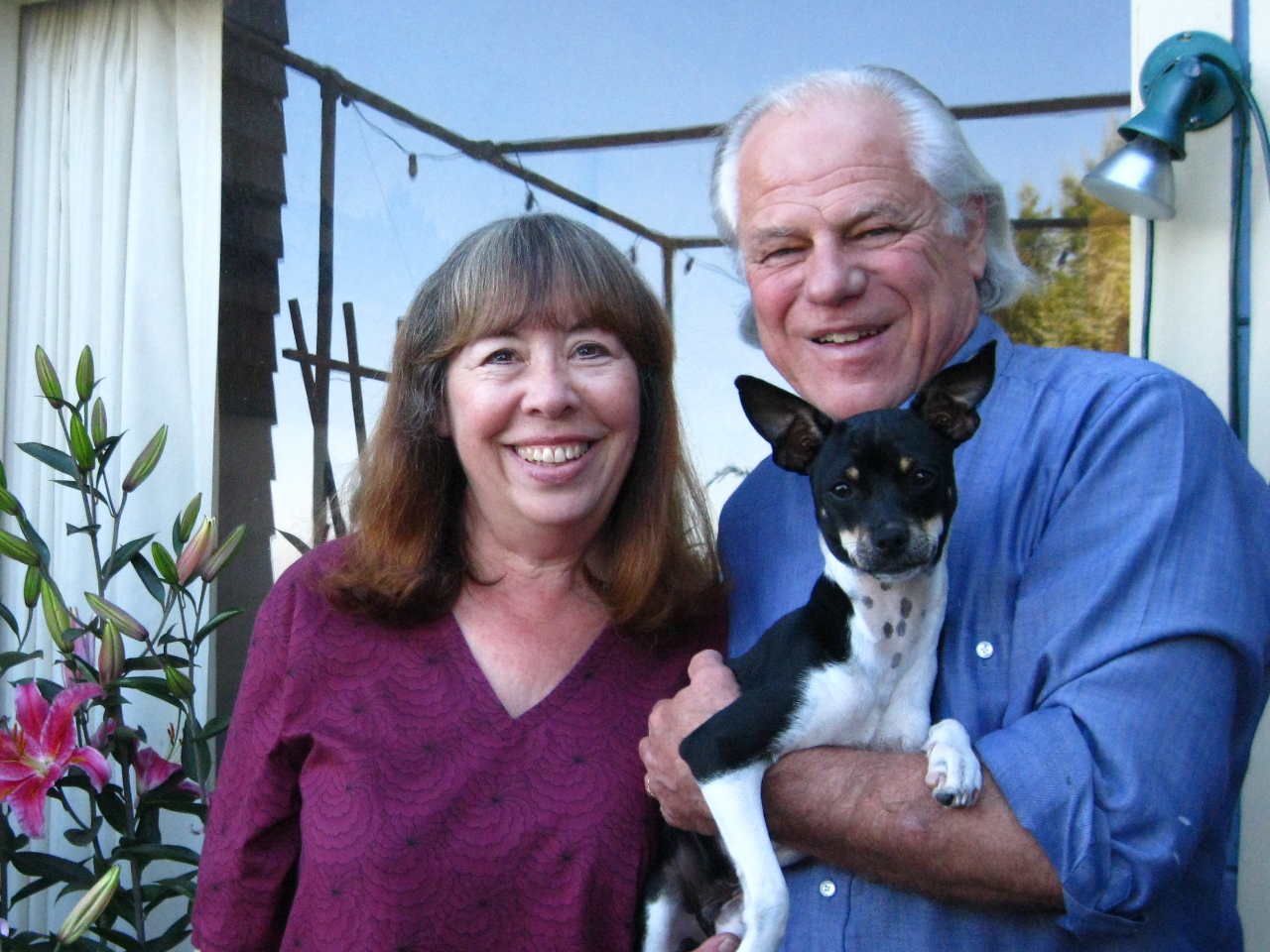 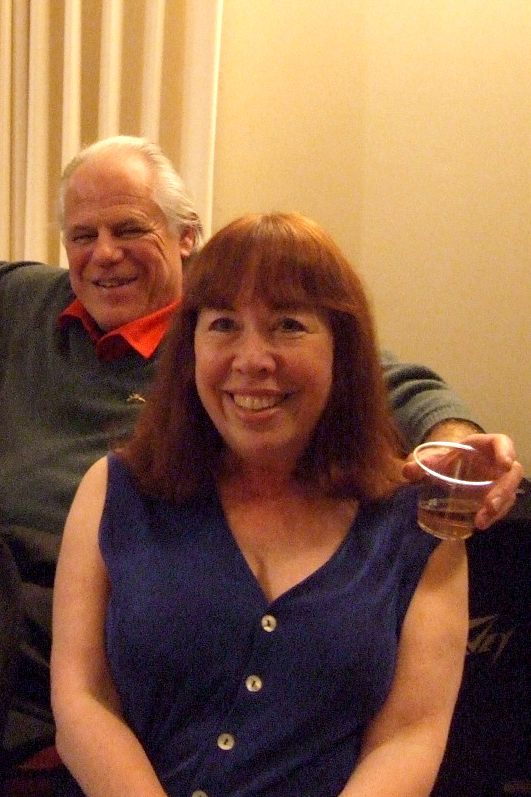 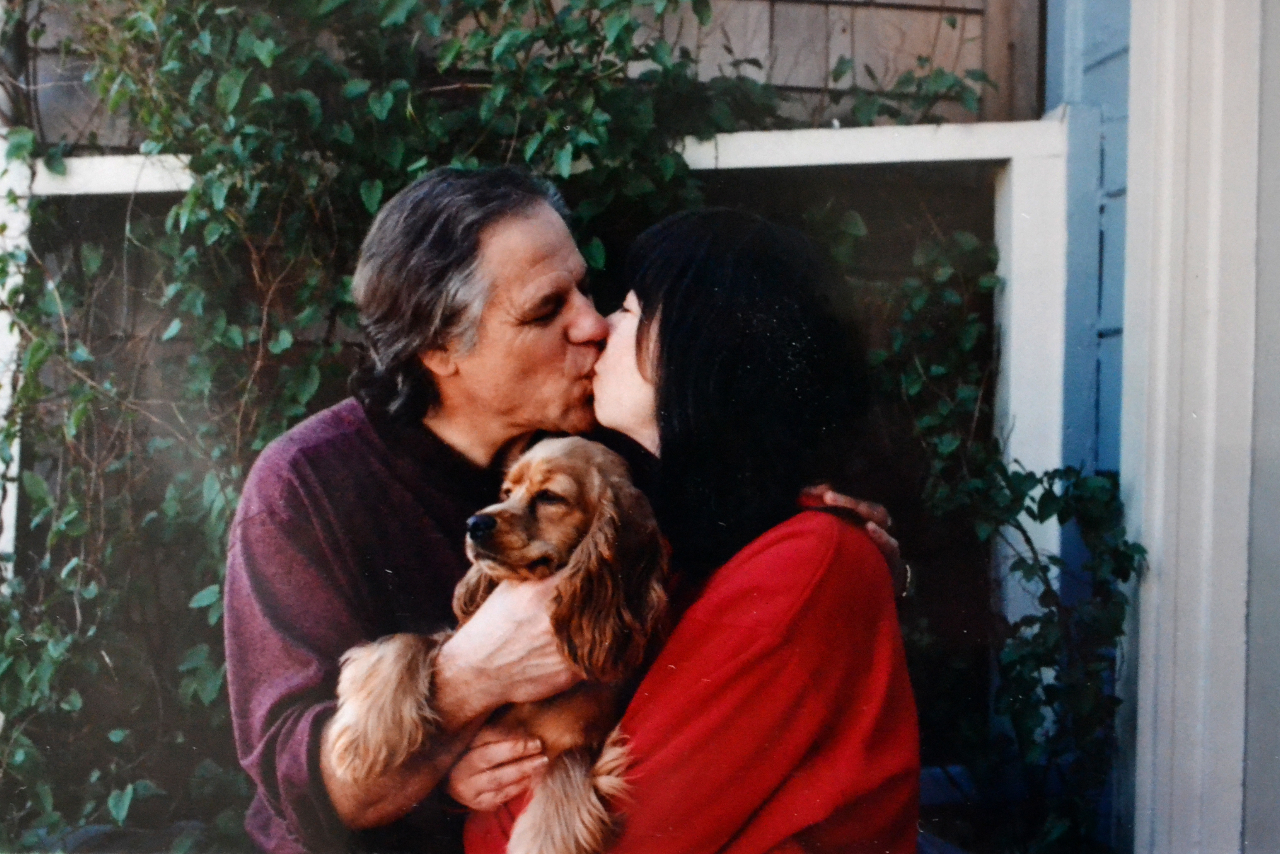 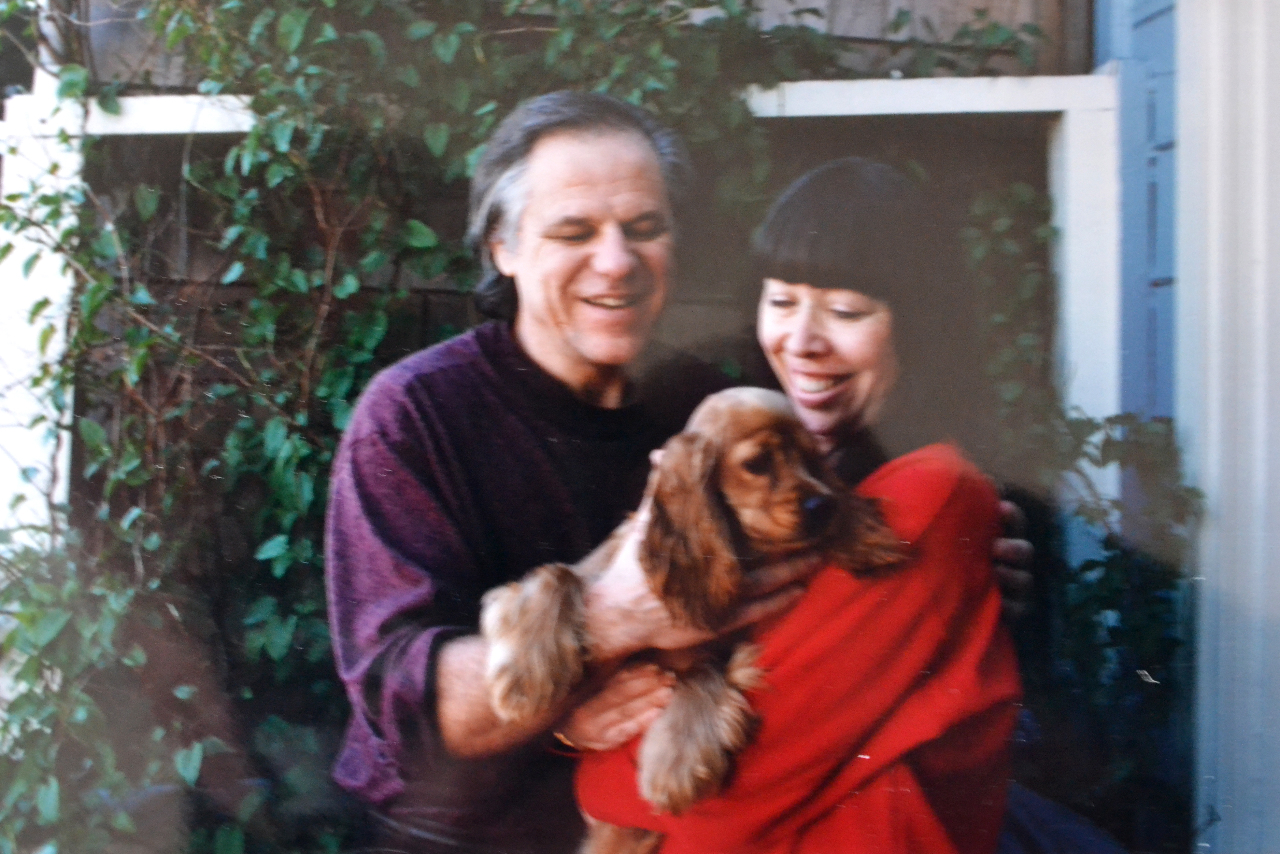 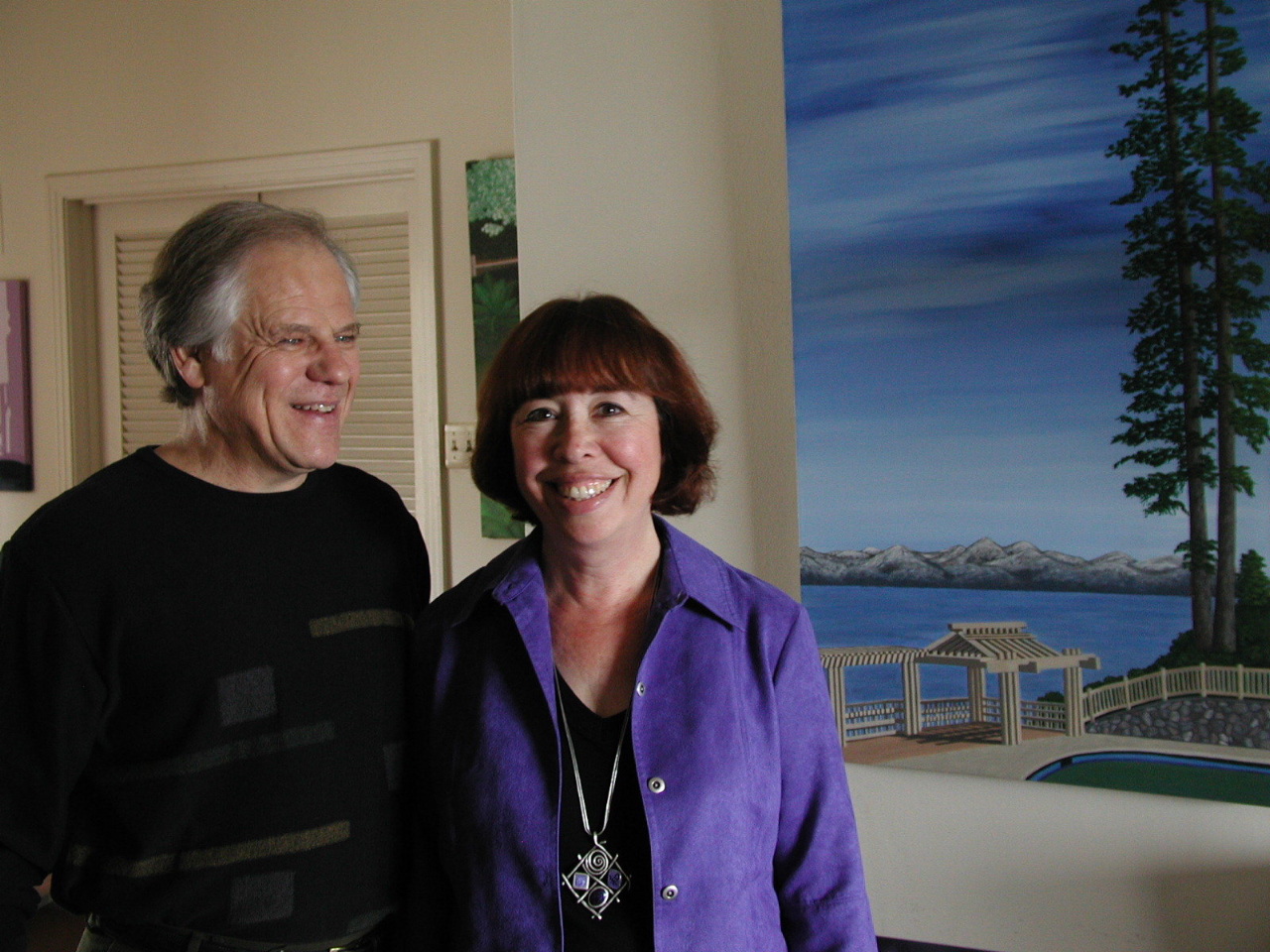 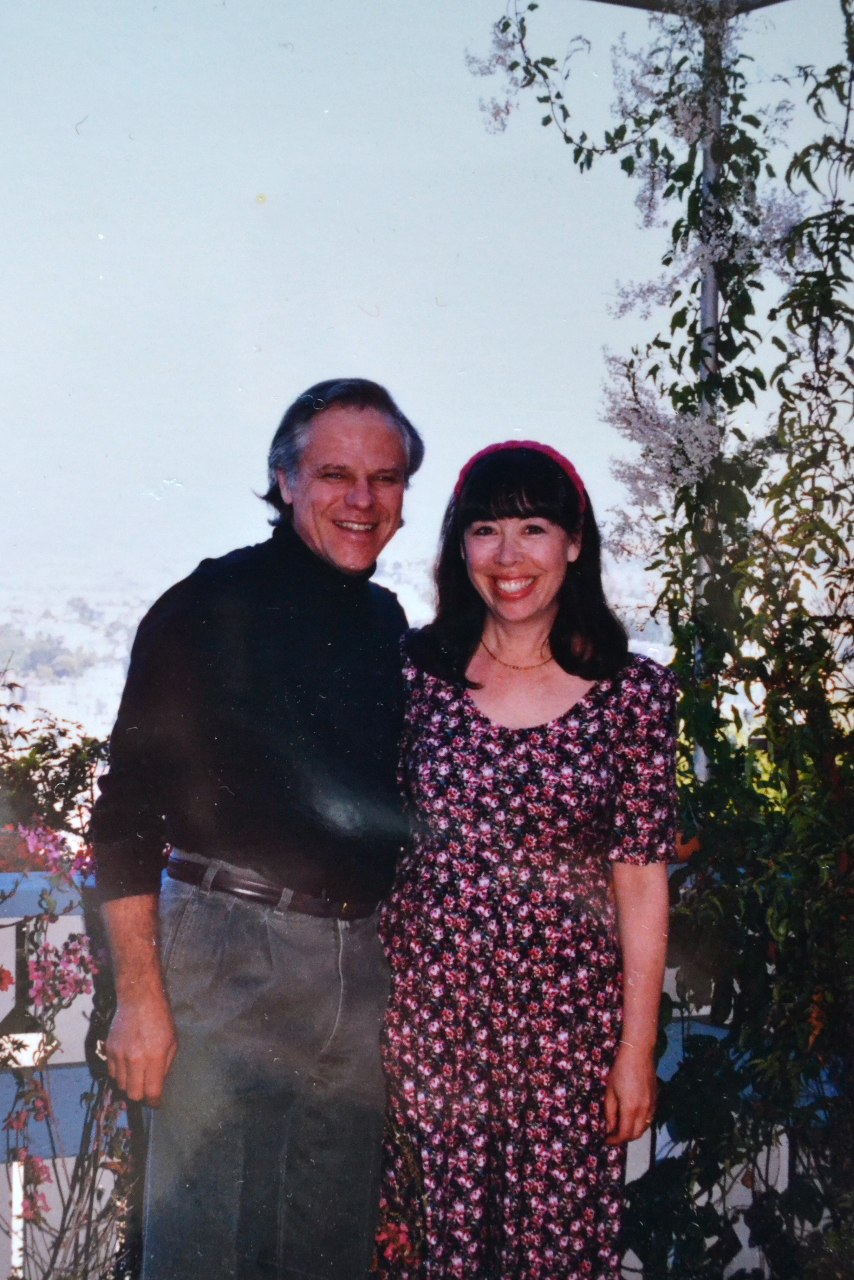 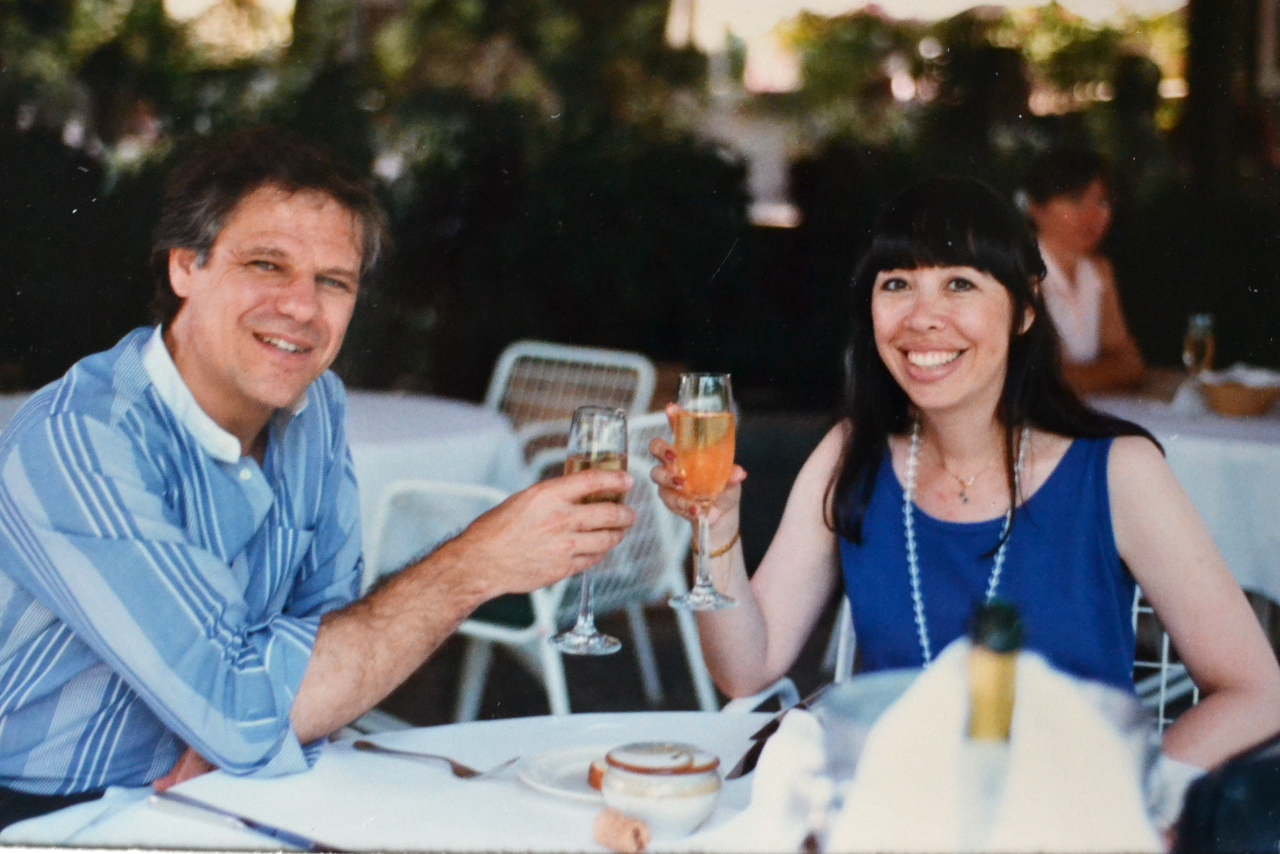 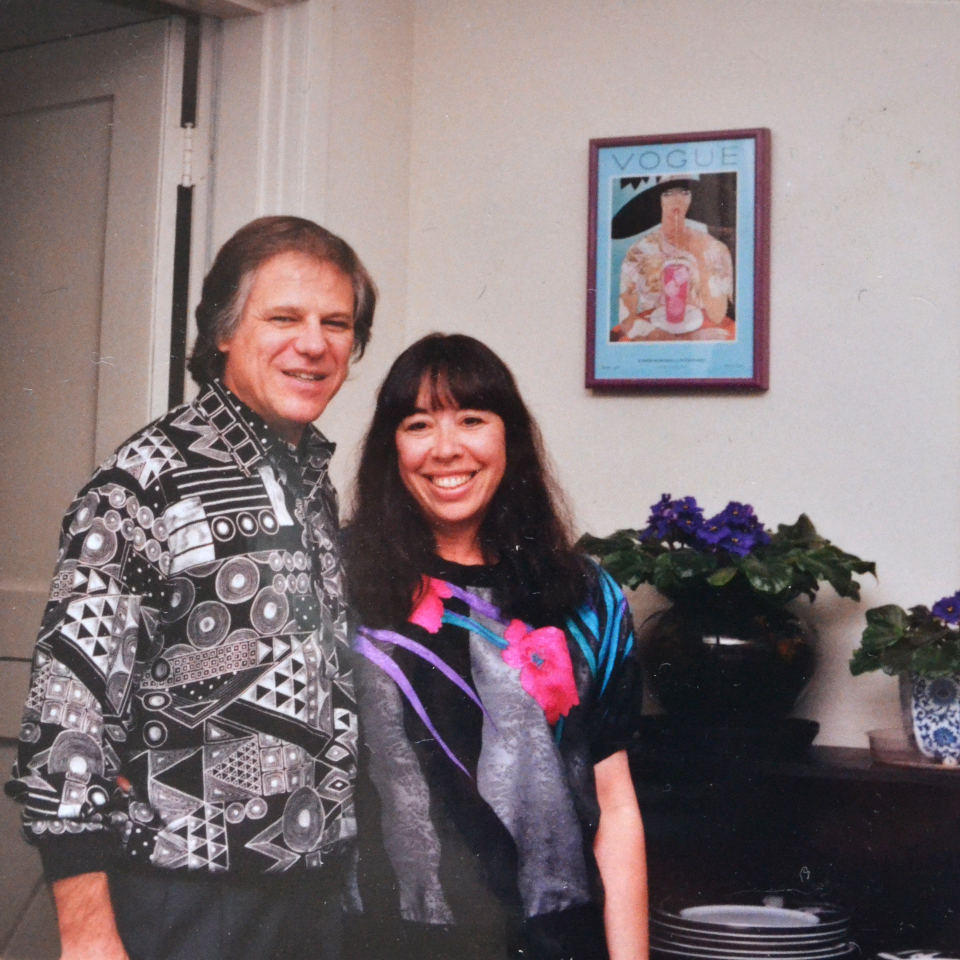 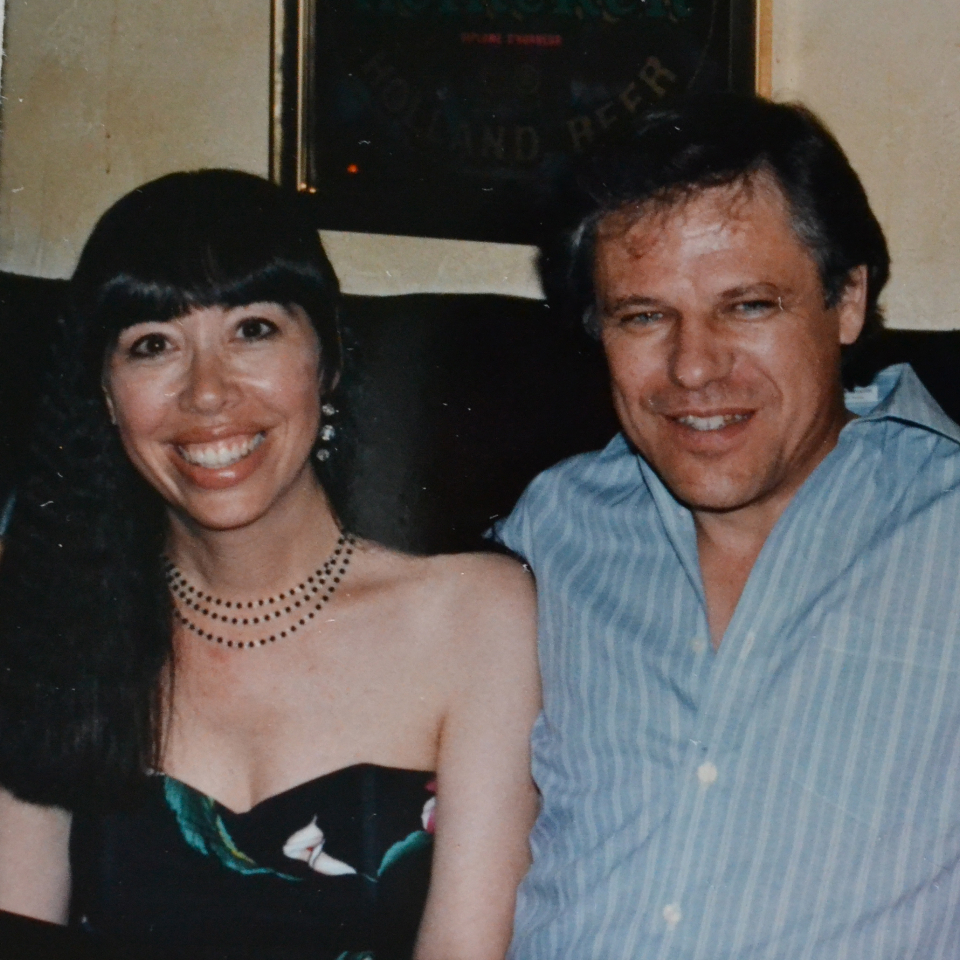 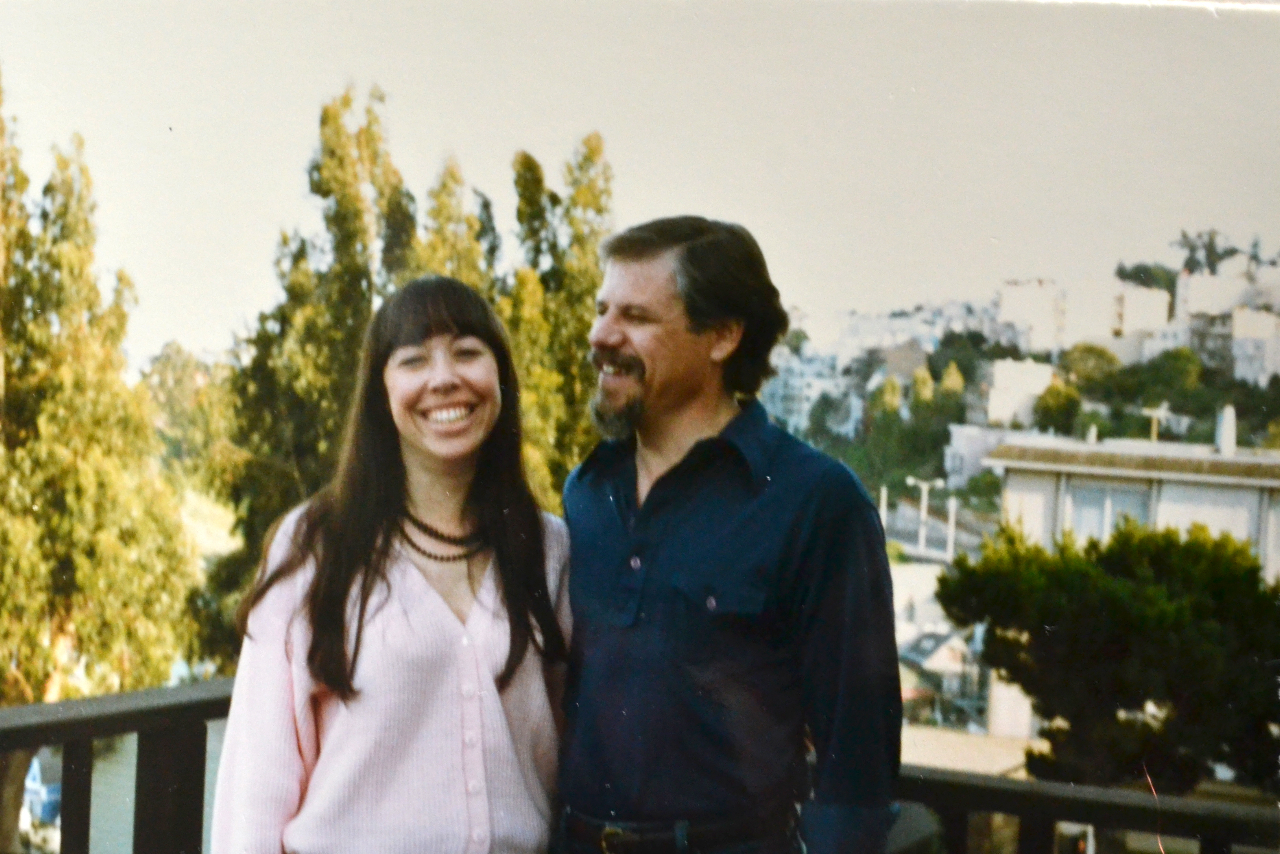 I'm so excited to share the Love Story of Andrea and Jerry for our Valentine Issue, it's always so refreshing to see and meet older couples who still have twinkles in their eyes when they look at each other, just very special.

I met Andrea and Jerry with my husband while walking our Cocker Spaniel on Ocean Beach, San Francisco many years ago. We started talking, exchanged numbers and became very close very quickly, we would have dinners and walks together all the time when we were still living in SF. I feel so lucky to have met them and have them as good friends. Reading their story and Love Letter from Jerry put tears in my eyes. Their story is a true romance story, I hope you will enjoy reading their story as much as I did.

So Andrea & Jerry you’ve been together for 35 years, that is quite a life achievement. Please share with us how did you two meet? Was it love at first sight or first kiss?

Andrea - We met at his brother’s wedding. It was definitely interest at first sight. We wanted some time away from his very large family so we went to the nightclub where my mother held court at a piano bar. She sang and accompanied many talented singers from the Los Angeles area. I drove and when I dropped him off at his brother’s house he kissed me goodnight. It was a very sweet and gentle kiss. I actually got butterflies. That hadn’t happened to me before.

How did you both know that you were meant for each other?

Andrea - This is kind of personal, but the first time we made love a voice in my head said that we loved each other. It was early so this was very surprising. I didn’t mention it to him. Several weeks later he was driving me to the airport in San Francisco after we had spent the weekend at his house in Sebastopol. I looked over at him and had the thought that we could grow old together. Again, I never had a thought like that before. And again, I didn’t mention it to him.

How long did you date before you decided to tie the knot? How did the propose happen? Was it as how you both imagined?

Andrea - We lived together for three years. Then one night we were at a very romantic Italian restaurant, with opera playing in the background. He got down on one knee. He is a very romantic man. I never imagined or thought about it. We were two very independent people who both had earlier long term relationships that weren’t completely fulfilling. I don’t think either of us were indulging in romantic fantasies until it was actually happening to us. Where did you have your wedding and how did you choose your wedding venue?

Andrea - We got married in a small, very special church in the Pacific Heights neighborhood of San Francisco called The Swedenbourgian Church. We wanted a spiritual ceremony but we were a combination of not religious Catholic and Jewish. This was fine with them. It was a lovely ceremony.

Andrea - My favorite was when he set up a table on the hill behind our house, with roses and Andrea Bocelli playing in the background. I don’t remember what he served for lunch but it made me feel very loved. These days Valentine’s Day is even more special because it is the birthday of our little terrier called Michael. It is now a family event. What do you think is the secret to a happy & balanced marriage?

If you could change one thing about your Jerry, what will be or is he just perfect already?

Andrea - I think the secret to a happy marriage is not to answer this question. Just kidding. I don’t think we can change other people. No one is perfect, certainly not me. But I heard someone say something like their imperfections fit together perfectly. Jerry is the only person who ever made me feel totally loved including my imperfections.

What would be a romantic night for you both?

Andrea - It’s fun to go out to a romantic restaurant. But we really do go for long walks on the beach or in the most beautiful part of Golden Gate Park everyday. I think our daily life is romantic. Most nights I make a delicious dinner and we watch a movie or favorite show and talk and laugh on the couch all evening. For us that is a dream come true.

If you have a million dollars, what would you like to do, will you travel to some exotic destination?

Andrea - I would love to try those restaurants that ultra rich people go to around the world. And, of course, taking beautiful walks during the day or evening. We always have fun when we travel and if we had a million dollars we could take Michael with us. What would be your advice for the young love birds out there who are deciding to get married? Do you recommend it?

Andrea - I was 37 when I met Jerry. I would say be sure you know yourself and your partner first. Know what is important to you. If you want to change something about him or her, don’t get married. If you are best friends and always want to be together, go for it. It is the best, the gold standard for happiness. Someone who is always there to have your back, to share the hard times and best of all the good times.

As a couple, we all get into some rifts at times, how do you handle tough situation or when you both are having a rough moment? How do you get through it?

Andrea -Think about what you are saying.  Don’t let your anger cause you to intentionally hurt the other person.  Remember this is someone you love.  Fight fairly, keep on subject.  I think it is important to let the other person know when you are hurt or upset about something they are doing.  Be honest, but as gentle as you can be.  And don’t save up and sandbag them.  When you have worked it out, let it go.  We both hate it when we fight.  Be the first one to say I’m sorry.  It helps a lot.

What do you think one or two big difference living as a younger couple in the 70’s and now?

Andrea -The roles aren’t as defined today. Woman often are making as much money or more than men. A lot of women are more sexually liberated. It is ok for the woman to make the first move. Maybe her job is higher up the ladder of success. I think that might make a different dynamic.

If there is one thing you have the power to change in the this world to make it better, what will that be?

Andrea - Get rid of Trump as soon as possible. Other than that, world peace, end hunger and give everyone a sense of humor.

A LOVE Letter : From Jerry

Andrea and I have been together since long before we met.

This time round, we were both in our late-thirties when our paths crossed So a lot of issues like parents and kids — were already mostly settled for us. It was all very romantic.

We first caught sight of each other in the hall outside a courtroom in Los Angeles. It was

Saturday afternoon, early December. I had flown down from San Francisco for my brother’s

wedding — a civil ceremony. Andrea was attending as a friend of the bride. We did not speak in that first moment, but a spark ignited. And over the next few hours it grew into an evening of music, laughter, conversation and a delicate first kiss before we parted ways near midnight.

Andrea took me to the airport the next morning, initiating a ritual repeated almost every

weekend over the next several months. It seems that the distance between us drew us ever

closer, as we alternated visits on the SF-LA express route. Our dates were 48 hours long,

requiring 800 miles of travel for one or the other. So this was no casual affair.

By August, we were living together in a small garden apartment in San Francisco’s Marina

now, still taking long walks on the beach and kissing at midnight on New Year’s Eve.

Of course it hasn’t been bon-bons and roses every day. Especially in the first few years, we

argued vigorously, and far more often than either of us wanted to. Looking back now, I realize it was mostly about positioning. Two fiercely independent souls were struggling to evolve into a state of loving co-dependence. I understand now that we were fighting to stay together.

I’m generally hesitant to give advice on matters of the heart. But I will say two things:

1) Make the right choice at the beginning. Don’t settle for less than what you want in a

partner, or you’ll always be looking for more. How do you know what you want? Think about it, maybe even write it down.

Once, soon after we moved in together, I said to Andrea “I can hardly believe you’re real. If I

had sat down and tried to make up the perfect woman for me, you’d exceed my fantasy.” She answered that she had, in fact, written down what she envisioned in a mate.

And here we are.

2) When you see your partner do something hard, acknowledge it, be grateful — especially if

it’s being done for you. You may not have to travel 800 miles for every date, but if you’re not

willing to go out of your way for each other at the beginning, you won’t be willing to do so later when it really matters. When you reinforce each other’s strengths, you strengthen the bond between you both.

The difference of Spirituality & Religiosity